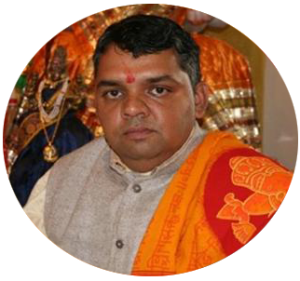 Pandit Pankaj Dixit began practicing as a priest over 10 years ago. He holds a First Class Masters Degree in Sanskrit and Art History from The National Museum, New Delhi, India. He studied Vedas (yajurveda) and Brahmanas in conventional guru-shishya tradition and a specialized course on purohitya from Lai Bahadur Vidyapeeth, New Delhi. In 1993 he was awarded a scholarship and grant to study South Indian Temple Architecture from The Nehru Trust for Indian Collection at The Victoria and Albert Museum, London, U.K. This unique opportunity provided him with insight into temple rituals, architecture and religious literature. He has written more than 50 articles on various aspects of our culture in prominent periodical magazines of national and international repute. He is the author of 3 books: Hindu Mythology Quiz, Essence of Puranas, and Essence of Upanishads. Currently, he is working on a book with the title: Ten Incarnations of Lord Vishnu. An eminent scholar, he is a multifaceted personality on Hinduism and is in the final stages of a degree on Vaishnavism & Agamas in Temple Worship from Madras University. Pandit Pankaj Dixit Ji is married and is the blessed father of two daughters and one son.